North of Havana: The Untold Story of Dirty Politics, Secret Diplomacy, and the Trial of the Cuban Five 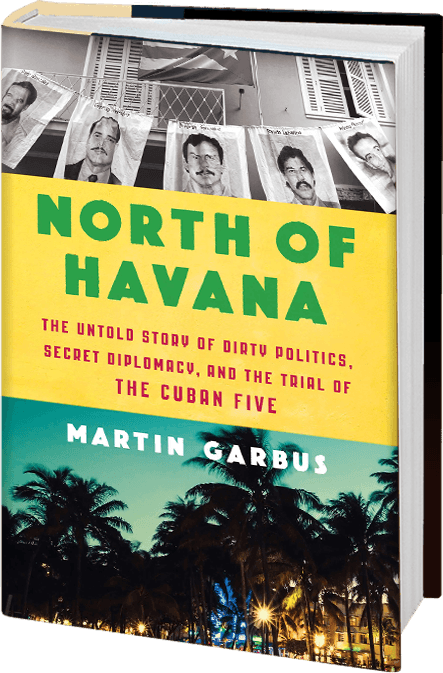 From one of America’s leading legal minds, a riveting look at the U.S.-Cuban relationship seen through the lens of a nearly impossible case

During his distinguished career, Martin Garbus has established himself as a well-known trial lawyer representing the likes of Daniel Ellsberg and Leonard Peltier. But there is no story Garbus wants to tell more than that of his most challenging case: representing five Cuban spies marooned in the U.S. prison system and his efforts to get them out.

North of Havana tells the story of a spy ring sent by Cuba in the early 1990s to infiltrate anti-Communist extremists in Miami. Erroneously charged by the U.S. government in connection with the 1996 shootdown of two planes circulating anti-Castro leaflets over Havana, the spies—in the absence of evidence—were convicted in 2000 of conspiracy to commit espionage and murder. Caught up in the sweep of history, the Cuban Five, as they became known, played a central role over the next decade in the recent thaw in Cuban-American relations.

Set in Miami and Havana, North of Havana is a mesmerizing tale of international intrigue, espionage, and political gamesmanship that continues to play a shaping role in American foreign policy and presidential elections. In the process, the books shows how the justice system can be, and is, subverted for political purposes and gives readers insight into one of the most fascinating legal cases of our times.

“Wasp Network,” North of Havana, and the Cuban Five, The New Press

“Martin Garbus’s natural habitat has always been the courtroom. But this riveting story of one of Garbus’s most difficult cases—his effort to free a Cuban spy serving two life sentences for murder—takes places far from the court room as we follow one of America’s great legal minds trying to piece together evidence to show that his client was the victim of a political show trial. Garbus’s powerful and poignant story of political demagoguery and media manipulation in southern Florida is a masterly portrait of the strengths and weakness of the American legal system.”
—Gay Talese

“This haunting story of Cuba-U.S. relationships takes us into the deepest parts of today’s American security system and exposes our pseudo-legal judicial process. Today, more than ever, every American must hear what Martin Garbus says.”
—Charles Nesson, William F. Weld Professor of Law at Harvard Law School

“Dramatic history and memoir. . . . This fearless and essential contribution to understanding relations between Cuba and the U.S. will enlighten readers.”
—Publishers Weekly

“A quick and vivid read, brimming with political intrigue and lessons about what can happen when law and public opinion are used for political ends.”
—Library Journal

“In this quick and impactful read, Garbus tells the story of [the Cuban Five’s] odyssey through the U.S. legal system. . . . A lively narrator, Garbus provides explanations of dense legal procedure and precedent that are thoroughly documented yet easily digestible as he fleshes out all the players, exiles and spies alike, to achieve three-dimensional humanity.”
—Booklist

“[Garbus’s] impassioned book is both an indictment of the legal system and a plea for prison reform. A harrowing chronicle of a fight for justice.”
—Kirkus Reviews

“Perfect for an audience that may not be familiar with the Cuban Five (or may have only viewed the trial through the media coverage that Garbus lambasts), North of Havana parses this complicated saga with incredible clarity while providing insight into one of America’s great legal minds.”
—Survival: Global Politics and Strategy

“Martin Garbus is not only a First Amendment champion but a natural storyteller. This is a remarkable, Kafkaesque tale of a veteran lawyer’s efforts to win freedom for his Cuban spy client, who is serving two life sentences for a murder he did not commit. Suspenseful and moving and infuriating. ”
—Joseph Finder, New York Times bestselling author of Judgment

“This book reminds us why the world needs courageous lawyers who will challenge state abuse and fight for justice. Martin Garbus represents the best of the legal profession—brilliant and scholarly, principled and fearless, his fight for his clients is always his highest priority. An inspirational account.”
—Baroness Helena Kennedy QC

“Marty Garbus, one of the nation’s greatest trial lawyers, tells the tale of one of America’s greatest show trials, of the Cuban Five—and of his efforts to achieve justice in a case thoroughly corrupted by politics and international intrigue.”
—David Cole, national legal director, ACLU, and author of Engines of Liberty: How Citizen Movements Succeed

“Shines a light on the seamy interaction between American politicians, the Cuban government, and hard-line Cuban emigrés in Florida.”
—Burt Neuborne, Norman Dorsen Professor of Civil Liberties and founding legal director of the Brennan Center for Justice at NYU Law School

“A revealing tale of politicized ‘justice,’ inhuman prisons and backdoor diplomacy. A fascinating read which is key for understanding U.S. relations with Cuba from Clinton to Trump.”
—Peter Winn, Tufts University, author of Americas: The Changing Face of Latin America and the Caribbean