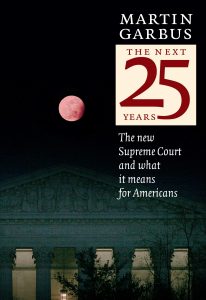 Garbus discusses the future of the U.S. Supreme Court and the grave threat to our rights, including free speech and other First Amendment issues. Published in February 2007 by Seven Stories Press.

“Garbus cuts right to the heart of what’s at stake, including rights to abortion, privacy and religion; states’ sovereignty issues; tax reform and others. With crystal-clear reasoning, Garbus sounds a wake-up call for those suspicious of the current administration’s long-term plans for the U.S. judiciary.” – Publisher’s Weekly

“An ardent defender of our freedom, Martin Garbus reminds us that the Supreme Court directly affects the lives of all Americans. In the last half century, the Court has played a central role in the effort to make America a better and fairer land. . . . Garbus alerts us to what he sees as the current Court’s undoing of much of that important work.” –Senator Edward M. Kennedy

“Mr. Garbus . . . argues that the ideological lock put on our federal court system in the past thirty years by the Republican right wing constitutes and clear and present danger to the basic legal and moral assumptions of a modern democratic republic. He lays out the evidence . . . and his case is sound. This work ought to be read by every voter in this country.” –E. L. Doctorow

“If you haven’t read The Next 25 Years, you may awaken one morning and ask, ‘What Happened to America?’ This is a clarion cry for every American to act before our constitutional way of life is all but a distant memory.” –Nadine Strossen, president of the American Civil Liberties Union