Tough Talk: How I Fought For Writers, Comics, Bigots, and the American Way 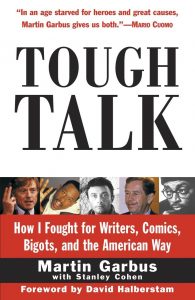 With an introduction by David Halberstam (Random House-Times Books, 1998, Times Books softcover, 1999), this is a First Amendment book that deals with media problems on the Internet including copyright, trademark, and libel, as well as prominent cases, including the defense of Lenny Bruce and Robert Redford’s case against the tobacco industry. Garbus deals with entertainment law and commercial litigation in free speech, copyright law, and intellectual property.

“In Tough Talk, we see a legitimate, peerless champion carrying the banner of the First Amendment. What a joy!” – Mario Cuomo

“Martin Garbus reminds us why the First Amendment comes first in the Bill of Rights. This powerful book retells what our founding fathers understood–that freedom cannot survive by silencing dissent. A free marketplace of ideas is the indispensable condition of a thriving democracy.” – Senator Ted Kennedy

“Martin Garbus has written a kind of First Amendment was hournal, with free speech the turf, the treasure, and the prize. It’s filled with courtroom gladiators, villains, and” – Diane Sawyer, ABC News

“Tough Talk is as entertaining as a bestselling novel and as persuasive as a Supreme Court brief. It will refresh your commitment to the American system” – Nadine Strossen, President, American Civil Liberties Union

“If anyone–Journalist or otherwise–has any doubts, qualms, or second thoughts about everyone’s right to speak his mind, get them to read this book.” – Morely Safer, 60 Minutes

“Martin Garbus is a gunfighter for the Bill of Rights. He goes wherever liberty is in jeopardy. Now he has written a book that us true, that is fearless, that is uplifting. And the best news of all: Garbus writes like an angel, not like a lawyler.” – Jack Newfield, New York Post

“This is a book about war. The war is one being coontinually waged against our freedom of speech. The warrior is Martin Garbus, who gas fought brilliantly and gallantly.” – Gerry Spence, author of How to Argue and Win Every Time